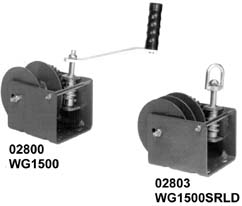 Applications requiring safe, controlled movement of loads can be met with D-L worm gear winches. The reel automatically stops turning whenever cranking is stopped. This means there is no freewheeling mode and no special mechanism required to stop reel fear movement. This safety feature makes worm gear winches an ideal choice for applications such as raising boats and davits, and raising and lowering retractable swing keels on sailboats. Worm gear winches do not require minimum load for operation.
All Dutton-Lainson worm gear winches are built for multipurpose hauling and lifting operations. They are not to be used as hoists for lifting, supporting or transporting people, or for loads over areas where people could be present.

All worm gear winches are CE-marked according to Maskindirektivets norm 89/38/EEC.

Capacity based on direct line pull on first layer of line on drum. Capacity is reduced as line builds up on the drum.

Not for the movement of humans.