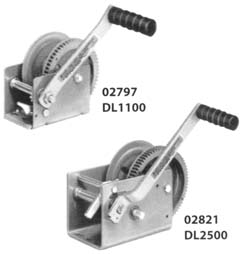 All pulling winches are built for multipurpose hauling and pulling operations. You can match your load requirements with the capacity on the specification chart below.

All manual winches are CE-marked according to maskindirektivets norm 89/38/EEC. TUFFPLATE zinc finish is standard.

All manual winches could be used with straps or wire.

NOTE: All pulling winches will allow a load to freewheel when the ratchet is disengaged. Brake winches should be used in place of pulling winches where a danger may be created by a runway load.

Not for the movement of humans.

All capacities shown are single line with 4.5 m cable on the reel and a 10% rolling friction factor. Capacity is reduced as line builds up on the drum. Note: 5% incline is 0.5 m rise in 10 m.